Middle School End of Year Performance at the MYC 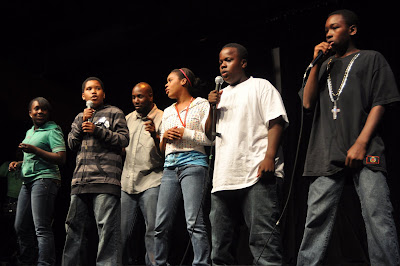 WCA and MLK students perform an orginal song, “Cool, Green, Fun,” which they made with Music Producer, Torman Jahi, while studying at the MYC on Wednesdays throughout the school year. A remix of their song is the official theme song for the Marin County Fair—it’s very catchy!
When I figure out how to post it here, I will do so. 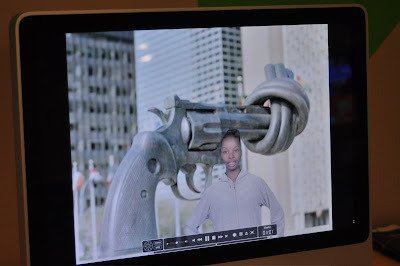 On display at the event were the Public Service Announcements created by the students while at the MYC. Here, Deachen, a 6th grader from Bayside Elementary, is seen inside her PSA about violence. 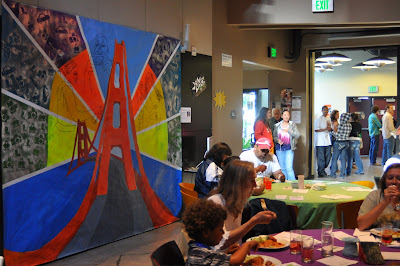 This mural was created by 6th-8th grade students in the Twilight After-School program, in collaboration with Youth in Arts Mentor Artist, Evan Bissell. The mural was commissioned by the Nonprofit Technology Network to create a backdrop for their annual conference in San Francisco in April 2009. While learning new arts techniques like drawing and painting, stenciling, and spray-painting, students were asked to question the role of technology in their lives, from a simple cell phone to a destructive bomb. Students from MLK Jr. Academy, Bayside, and Willow Creek Academy worked together to make decisions on the design and painted it over the course of three months, both at MLK Jr. Academy and The MYC Youth Center. 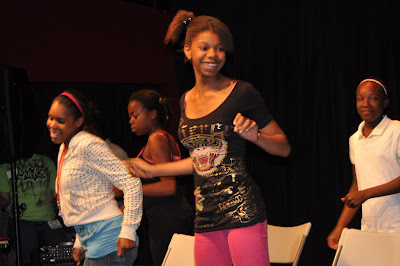 Sholonda, part of the girls dance group that performed. They’ve been practicing under the direction of Mentor Artist, Mimi Baxter.